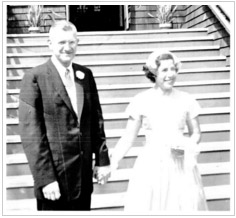 Jay and Elizabeth Tyrrell were humble people. Very few people knew they were wealthy. There was certainly nothing flamboyant about their lifestyles. Jay could often be found in his garden wearing dungarees with holes in them. But here's the catch. They donated a large portion of their wealth to twelve charitable organizations that serve the Connecticut and Maine communities in which they lived including the Main Street Community Foundation.

As a matter of fact, if the late Jay and Elizabeth Tyrrell knew their story was being told, they would most certainly object. Publicity just wasn't their style. However, giving back to the community certainly was a priority.

Jay Tyrrell worked as the Audio-Visual Director in the Bristol school system back in the 1950's. At the time, Elizabeth Windsor was Head of the Art Department. Carl Magnuson, the city's School Superintendent at that time, took it upon himself to introduce Jay to Elizabeth, the woman who would later become his wife.

While both had regular day jobs, they also had other interests. Jay began dabbling in stocks and soon his fortunes began rising dramatically. When it came to the stock market, he was a wizard. Elizabeth, a descendent of Roger Sherman one of five authors who drafted the Declaration of Independence, was a talented artist. She was a watercolorist of note. Over the years, her works of art were often on exhibit at the Bristol Public Library, the New Britain Museum of American Art, Central Connecticut State University and the Massachusetts House Gallery in Lincolnville, Maine.

Back in the mid-sixties, long-time neighbors of the Tyrrells, Beverly and Gerhardt Bobroske, were a young couple with three sons, Timothy, Martin and Theodore. Since the Tyrell’s did not have any children of their own, Jay and Elizabeth invited the Bobroske family to spend a few days at the Tyrrell cottage in Owls Head, Maine. It would turn out to be a summer tradition and no one enjoyed spending time with the Bobroske children more than the Tyrrells.

As their wealth increased, the couple turned to philanthropy helping schools and organizations that served children. Jay passed away in 1990. Upon Elizabeth’s death in 2010, the Main Street Community Foundation was notified of a bequest by will to establish two funds at the Foundation to benefit the community and ensure Jay and Elizabeth’s vision would continue. The Jay W. & Elizabeth M. Tyrrell Scholarship Fund will benefit students pursuing higher education in the field of visual arts. The Jay & Elizabeth Tyrrell Fund for the Arts will promote artistic and cultural opportunities in the Bristol community. Bequests made through the estate of Elizabeth and Jay Tyrrell have helped twelve organizations that serve children and the greater community.

When the Tyrells decided to leave a legacy for the community, Jay told his wife, "You can put my name on it, but only after I die." Both Jay and Elizabeth were made the same way; both giving of themselves, but doing so without any fanfare. Their impact on the lives of so many people will continue to be appreciated far into the future.