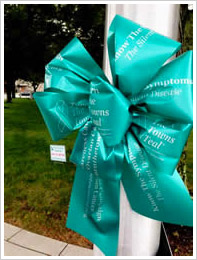 In the month of September, teal bows adorn fence posts, lightposts, trees, and doorways - while lawn signs convey an important message throughout Bristol. All have been placed to raise awareness of ovarian cancer and its symptoms. Tony Lodovico established the “Bristol Talks Teal Fund” at Main Street Community Foundation in his wife’s honor in 2013. Judie Lodovico is a twelve year ovarian cancer survivor.

While the fund’s primary purpose is to raise awareness of ovarian cancer symptoms, its ultimate goal is to save lives through early detection of the disease. Teal is the color associated with ovarian cancer awareness campaigns, and September has been designated as National Ovarian Cancer Awareness month. The fund’s future will also assist individuals who suffer from ovarian cancer and may qualify for, and need, medical assistance they cannot provide for themselves.

Ovarian cancer awareness information is displayed throughout the community on teal ribbons, posters, and lawn signs. “Teal has become the landscape for Bristol for the month of September,” Judie shared. The symptoms of ovarian cancer are often vague and /or confused with other conditions, causing most women to find out too late that they indeed have the disease. It is the deadliest of all gynecological cancers and is known as the “silent killer”.

Judie received a thank you note from a neighbor who received an early diagnosis and effective treatment for ovarian cancer because she recognized her own symptoms due to the “Bristol Talks Teal” campaign.

The first two years of Turn the Town Teal were financed entirely by the Lodovico Family. However, many people came forward and offered to help. Tony and Judie were reluctant to accept donations at first, but a great number of people from the Bristol community continued to offer their support. The Lodovicos realized that Turn the Town Teal had already significantly impacted the community – and would have the potential to make an even greater impact if they included other donors in the ovarian cancer awareness campaign.

“The generosity of the people of Bristol motivated us to establish the Bristol Talks Teal Fund. We wanted to pay it forward, to give something back,” explained Tony Lodovico, “We felt that it was important to keep the donations in Bristol. We are very proud of the way our community has embraced our attempt to raise awareness of ovarian cancer symptoms to help save women’s lives.”

We are very grateful to the following donors who supported the 2013 “Bristol Talks Teal” campaign: