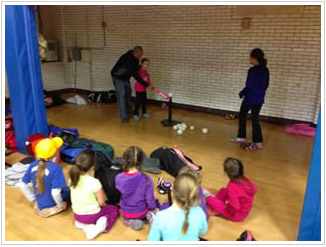 We have often heard that youth who participate in organized sports develop leadership skills, self-confidence and many other positive character traits that lead to success in life. Well, that is exactly what Bristol Girls Little League Softball (BGLLS) is hoping to achieve with a $3,500 grant from the Women & Girls’ Fund that was awarded in late 2013. It is the second year they were funded to provide confidence building workshops and pre-season skills clinics to girls participating in the league.

BGLLS is a city-wide league that was formed eight years ago when softball split from the better-known Little League and it is sustained on contributions of volunteer time, donations and grants. It is a league filled with passionate people who believe that sports can transform lives.

“We provide girls with a chance to play softball and to learn not only softball skills but also the life lessons that team sports provide.” explained Brian Bender, President of BGLLS, who became involved with the league when his four daughters started playing.

The organization works to build every girl’s self-confidence and teach them about teamwork, competitiveness and facing challenges. With funding from the grants, BGLLS is able to rent fields and batting cage time as well as hire female instructors with softball experience for the pre-season clinics. The League is also able to expand its clinic offerings to accommodate four players per team rather than the previous two. The league offers two pre-season clinics: one focused on general softball skills such as fielding, throwing and batting; and one focused on pitching mechanics and skills. Both are provided at no charge to players but to “pay it forward”, the girls are asked to bring non-perishable food items to donate to a local food pantry.

“The grants from the Women & Girls’ Fund has had a huge impact on the softball league,” said Bender. “I and a lot of the volunteer dads were giving the girls instruction based on our baseball backgrounds. However, we quickly discovered that there are completely different skills and techniques needed to play softball well.”

Since its establishment, BGLLS, a girls-only league and a nonprofit, has steadily improved its level of instruction and program offering. The league has also attracted more girls – there were 185 participants in 2013 and the league is anticipating close to 200 players in 2014.

“We want to not only make these girls better softball players but also better people,” stated Bender.