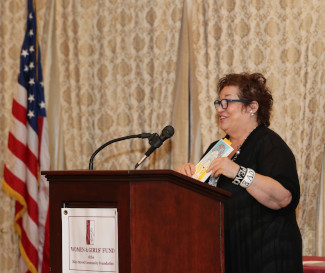 Despite the challenges of the last eighteen months, there has been a lot to celebrate for the Women & Girls Fund at Main Street Community Foundation. This year marks the 20th anniversary of the Fund, and since its establishment in 2001, over $620,000 in grants has been awarded to improve the conditions and opportunities for women and girls in Bristol, Burlington, Plainville, Plymouth, Southington and Wolcott.

While the first fundraiser for the Women & Girls Fund was a very successful bake sale, an annual fundraising event appropriately titled the Wonder of Women (WOW) has been held since then. These fundraising efforts has resulted in an endowment of now valued at $830,000.

After having to cancel the 2020 event, the 2021 WOW was held on September 8 and welcomed approximately 350 people to the Aqua Turf to reflect and celebrate. The evening featured Patti Russo as the guest speaker, a nationally recognized leader focused on improving the quality of life for women in Connecticut and the United States; she currently serves as Executive Director of The Campaign School at Yale University.

A highlight of this year’s event was the announcement of the 20th Anniversary grant recipients. To commemorate this milestone, the Women & Girls Fund committed $20,000 for a grant program to award unrestricted support to nonprofit organizations. Eligible applicants were asked to answer a single question: “Twenty years from now, what do you hope others see as your organization’s legacy for women and girls?”

The 20th Anniversary grantees are:

Excerpts from the applications – which ranged from poems to mock press releases – were shared with the audience, and all grantees were in attendance to accept their grant awards.

“One of the most powerful applications stated that ’it’s the year 2041, and in this year it’s our dream that we’re no longer here,’ suggesting that the challenges they help their clients overcome daily are no longer an issue,” said Cathy Cassin, Chair of the Fund’s Advisory Board. “Attendees at WOW were able to hear how their support of the event and the Fund is directly contributing to the ideas and solutions that organizations presented.”

The Women & Girls Fund began with a living room meeting of local, dedicated women. It is thanks to their commitment and the commitment of hundreds of other supporters that the Fund is able to impact women and girls so broadly and so deeply.

“We will continue moving forward together,” stated Cathy Cassin. “As an endowed fund, the Women & Girls Fund will be here forever.”