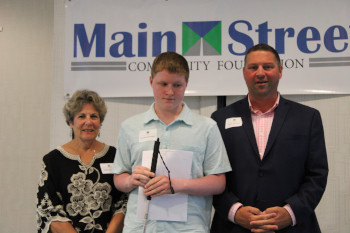 The Bristol Lions Club received a bequest several years ago from the estate of Mark M. Keating to establish a scholarship fund in memory of his father James J. Keating. The scholarship was intended for Bristol residents who were graduating high school students and classified as legally blind. But while scholarships with specific criteria allow for students with particular life experiences to apply within a smaller pool, the specificity of the criteria can make it difficult to grant the scholarship annually.

The scholarship continues to be available first and foremost to a graduating senior from Bristol who is classified as legally blind or visually impaired as defined by the Connecticut General Statutes Section 10-294a. However, in a year when there may be no Bristol applicants, the scholarship may be awarded to students from the other communities served by the Foundation, which are Burlington, Plainville, Plymouth, Southington and Wolcott.

Keating's father, for whom the scholarship is named after, was born in 1890 and passed away in Bristol, living to be 107 years old. After retiring, James became invested in eye health after his friend lost their eye sight, and he joined the Bristol Lions Club. As part of his work, he helped organize glaucoma and vision screening drives, as well as led efforts to set up vision screening machines in Bristol schools and institute mandatory vision testing of schoolchildren. It is no doubt that it was this passion and generosity that inspired his son to create this scholarship fund.

A commitment to eye health and those with visual impairments is one of the cornerstones of the mission of the Lions Club, locally, nationally, and internationally. When asked about the work they do around this cause, Everett Lyons, president of the Bristol Lions Club said, “Locally, our club focuses on pediatric sight screening, assisting the needy to secure eye examinations and prescription glasses, providing therapeutic assistance in conjunction with Bristol Hospital to residents suffering from diabetic retinopathy or macular degeneration, supporting the state Lions efforts to fund eye research at both Yale and UConn medical laboratories as well as funding summer camp experiences for diabetic children, as diabetes is the #1 cause of blindness in our country.”

Jeremey Evanoski, the first recipient of this grant and a 2022 Terryville High School graduate, was awarded $2,800 from the Bristol Lions Club/James J. Keating Scholarship Fund. He will be pursuing computer science at Central Connecticut State University.

The legacy of both James J. Keating and the Bristol Lions Club is why the Foundation is honored to steward this fund in perpetuity. Anyone interested in making a contribution to the Bristol Lions Club/James J. Keating Scholarship Fund may do so at any time by donating online here or by sending donations to Main Street Community Foundation, P.O. Box 2702, Bristol, CT 06010.

Applications for this scholarship, as well as the dozens of other scholarships the Foundation administers, are available on January 15 of each year; the deadline to apply is the middle of March.