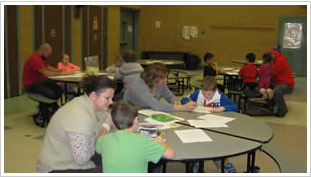 March 2015 - “We need to change the math culture in our community and show parents that math is not something to be feared or avoided, but embraced in a fun, interactive way with their children,” explained Phil Sanders, the Plainville Community Schools’ elementary instructional leader for math and science. During conferences over the past few years, “thirty-eight percent of parents would say, ‘I’m not good at math,’ and that stuck with me,” Sanders stated. Parents may not understand their children’s math homework, and may have difficulty helping with assignments.

After reflecting on parents’ comments, he decided to apply for a grant from the Plainville Community Fund at Main Street Community Foundation to bring Family Math Nights back to the elementary schools after a two year hiatus. A grant was awarded in the amount of $1,200, which enabled Sanders to offer families the opportunity to interact by playing games that involve math; using basic skills like addition, subtraction, multiplication, and division.

A total of six family math nights were held, among three elementary schools (Wheeler, Toflon, and Linden Schools), with 450 participants. Regina McConachie, a first grade teacher at Wheeler School worked collaboratively with Sanders at all three schools. “It’s these kinds of family, interactive type games that stress and reinforce the skills that students need at that grade level, “ Sanders said, adding that he splits the nights up at each school – one night for kindergarten through second grade; and a second night, offering problem solving games designed for third grade through fifth grade.

Parents take home supplies such as dice, cards, books, and more so that they can continue to play these games at home to enhance their students’ skills, while brushing up on their own. Practicing and reinforcing math skills at home fosters success in school, and lays the foundation for more advanced math like algebra or solving word problems.