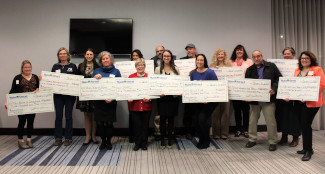 This year, a total of $43,400 in grants were awarded to 13 organizations serving women and girls in Bristol, Burlington, Plainville, Plymouth, Southington, and Wolcott in a variety of ways. The grants awarded and their purposes are as follows:

These grants were funded by four sources: the proceeds of the annual WOW event, the endowment, and two other named funds whose distributions support initiatives identified by the Women & Girls Fund: The John & Gloria DiFrancesco Fund for Women and Girls and the Barbara Hackman Franklin Fund for Women.

Both of the named Funds were established on the occasion of the 10th Anniversary Year of the Women & Girls Fund. The John & Gloria DiFrancesco Fund for Women and Girls was established in 2011 by John and Susan Scarritt to honor Susan’s mother Gloria and honor the memory of Susan’s father John DiFrancesco, who both lived their lives full of compassion and were committed to community service. The Barbara Hackman Franklin Fund for Women was established in 2011 by Barbara Hackman Franklin’s family. Barbara was the 29th United States Secretary of Commerce, and led the first White House effort to recruit women for high level government jobs, nearly quadrupling the number of women serving in those positions.

Main Street Community Foundation has awarded over $718,000 in grants from the Women & Girls Fund to organizations and individuals in Bristol, Burlington, Plainville, Plymouth, Southington and Wolcott since the Fund’s establishment in 2001.