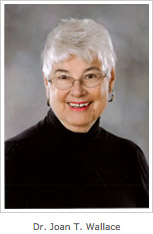 Fund Turns a Dream into a Reality

September 2015 - One moment, one award, changed her life. She had a dream and set a goal.

“When I received the Eva M. Bissell Scholarship at Southington’s Lewis High School in 1947, I decided that I wanted to provide a scholarship someday,” explained Dr. Joan Wallace.

In 2014, Dr. Wallace made that dream a reality. Through an IRA charitable rollover gift, she established the Dr. Joan T. Wallace Prize for Highest Achievement in English at Southington High School at Main Street Community Foundation to recognize and promote excellence in all areas of the English Language Arts. A scholarship will be awarded annually to the graduating senior at Southington High School with the highest GPA in English/Language Arts who is pursuing post-secondary education at a college or university.

Dr. Wallace is a lifelong learner and lover of the English language, especially its literature. “The scholarship I received was not enough to fully fund my education, but it certainly helped,” she said. “My parents struggled through the Great Depression. They had four children and could not afford to send me to college. I had to pay my own way.” Dr. Wallace worked at a department store and babysat to make her first tuition payments. “At the time, I paid $21 quarterly, which may not seem like a lot now.” According to the US Census, the average annual family income in 1947 was $3,000. “My biggest costs, in addition to the tuition, were bus transportation, books, and clothing.”

Over the course of the following three decades, Dr. Wallace earned her advanced degrees at Central Connecticut State University and the University of Connecticut. She achieved those milestones while working, raising five children, and volunteering in her community. After she earned her A.S. in Business, she worked as a clerk and assistant to the Business Manager at CCSU until 1957, when she gave birth to her first child. She began her teaching career in the 1970’s while pursuing her B.A. and M.A. degrees. During this time, she gained valuable experience in 7th through 12th grade English classrooms. Upon earning her PhD from the University of Connecticut in 1987, she became Southington’s first Coordinator of English Language Arts and served in that position until her retirement in 1997.

“One of my goals was to visit every classroom in every school over the course of the eleven years I served as Coordinator of English Language Arts. I worked directly with students on reading, writing, and test taking strategies.” Dr. Wallace led curriculum and staff development initiatives that were focused on achieving Connecticut Mastery Test goals. She empowered teachers by including them in decision- making throughout the process.

"Dr. Wallace is very committed to the Southington community, both professionally and personally. Main Street Community Foundation was able to provide a vehicle for Dr. Wallace’s long-term philanthropic goal. By establishing a merit based scholarship fund with criteria that she deemed important, she will help other students carry on the same tradition of self-determination and excellence.”