An Interview with Jarre Betts 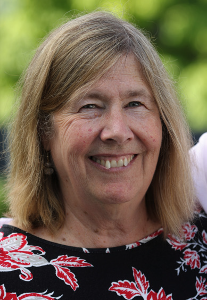 MSCF’s Vice President of Programs will be retiring from the Foundation on December 31st after dedicating 18 years
to its advancement and growth. This was published September 2018.

How did you initially hear about the Main Street Community Foundation (MSCF) and why did you want to work here?
I had heard of it because my brother, Tom (Barnes), was involved as a Founder. Then Bob Merriman asked me to be on the distribution committee. I had been serving on that for quite a while when focus groups started for the Women & Girls’ Fund (WGF) and I got involved with that. While serving on the WGF Advisory Board, Cheryl Dumont-Smith (the former President) announced they were looking for someone to work part-time in the office.

How has your role evolved?
When I began at MSCF in 2001, we were a small staff of just Cheryl, myself and a part-time accountant in a two-room office. I worked part-time until 2007 when Cheryl left and I served as Interim President for a short time. Once Susan Sadecki (the current President & CEO) was hired, I went down to working four days a week. I’ve been involved with the scholarships and grant-making processes the whole time I’ve been with the Foundation and I’ve seen that grow tremendously. Now we’re a staff of six with our own big office in Bristol!

What has been your favorite thing about working at MSCF?
The opportunity to meet other people – the staff are amazing; being able to get to know all of the local non-profits and companies; the volunteers we work with and our Board of Directors. It’s the people. They’re all very passionate.

What is one thing you want the community to know about MSCF?
I would want people to understand that you can start a fund, no matter what your income level. If you feel strongly about an organization or a field of interest, you can create an endowment and you can make an impact on that cause forever.

What is your proudest moment/accomplishment?
Just being a part of the growth of the Foundation and seeing it get bigger. (Jarre is too humble to mention that while she has been a part of MSCF, grantmaking has gone from $165,000 in 2001 to $1.7 million in 2017.)

What are your plans for after December 31st?
I’m not telling! I have lots of different ideas of things I’d like to try but I don’t want to get tied down to one. I don’t know how people say they’re bored when they retire – there’s so much out there to do!