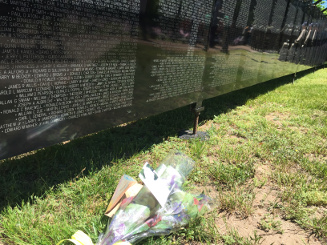 June 2017 - The rumble of motorcycles in early June gave no doubt that it was coming. The Wall that Heals was on its way to Memorial Boulevard in Bristol. There, for one weekend, veterans, family members, friends and strangers visited the half-scale replica of the Vietnam Veterans Memorial Wall and honor those who gave their lives in Vietnam.

The Wall that Heals was founded by the Vietnam Veterans Memorial Fund and was brought to Central Connecticut by the Bristol American Legion Post 2. Main Street Community Foundation awarded a $1,000 grant from the Money in Motion Fund to support the initiative. The Wall has been on display in hundreds of cities and towns throughout the country and in Bristol was displayed along a path that was created for a similar wall that came to the city in 1998.

“There are 58,307 names on the Wall,” stated Susan Sadecki, President & CEO of Main Street Community Foundation. “Many people in this area will never get the chance to visit the Wall in Washington D.C., find the names of their comrades, family members or friends and heal with that experience. We are proud to be able to honor those who gave their lives while helping those who knew them.”

The weekend also provided a chance to educate the public about the Vietnam War, the Wall and the era surrounding the War. Items that were used in Vietnam were on display and the mobile education center featured photos of service members, letters and memorabilia left at the Wall in Washington D.C, maps of Vietnam and timelines.