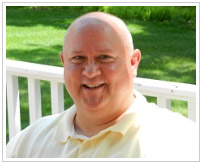 Hal Kilby, the fourteen-year-old Vice President of Immanuel Lutheran School’s eighth grade class, presented a donation to the Bristol Brass Foundation on behalf of his peers. “I remember using the word ‘modest’ to describe the donation, and the adults in the audience laughed,” recounted Mr. Kilby, now a veteran history teacher at Bristol’s Chippens Hill Middle School (CHMS) with close to thirty years of professional experience. He now realizes that the adults in the audience had a true appreciation for the value of each hard-earned dollar. They perceived the donation to be significant rather than ‘modest’. That event was one of Hal Kilby’s first forays into philanthropy, and taught him that a person doesn’t have to be a millionaire to have a positive, long-term impact on his or her community through charitable giving.

While at a party during the summer of 2010, Hal was listening to a conversation about charitable giving. “I have a life insurance policy with a cash value of $100,000. Since I hadn’t gotten married and don’t have any children, I’d been thinking about what to do with the money. I’d considered setting up a scholarship fund, but someone discussed the potential for a different kind of fund that would benefit a larger number of people.” Mr. Kilby learned that he could set up a planned gift and designate the Main Street Community Foundation as the primary beneficiary of this life insurance policy. Upon his death, the life insurance benefit will be used to establish a permanent fund. Hal consulted with his closest friends and they agreed upon a name, “The Hal Kilby Athletic Endowment Fund”.

Mr. Kilby has been involved in youth athletic programs for decades having coached girls’ basketball for over thirty years and football as well. As a young man, he participated in a variety of sports and youth programs. He was named “Boy of the Year” in 1976 at the Bristol Boys and Girls Club. He coached American Legion baseball teams for nineteen years. He has also coached high school softball and tennis. “Research has proven that kids involved in sports programs get into less trouble both in and outside of school. Kids involved in sports tend to get better grades,” explained Mr. Kilby. “Most importantly, the values taught in a sports program transfer to real life. Sports programs help us raise kids to be better at teamwork and to be productive members of society. They learn to give back to their community.”

Hal Kilby was born and lived in Bristol for most of his life. His parents instilled a sense of community and the importance of helping others by setting an example. “My mom and dad were always volunteering. My mom was active in my school’s PTO. When our church went through a rebuilding process, my dad would help at night and on the weekends. He’d be right up on the roof or wherever they needed him, tools in hand.” In addition to coaching, Hal follows the example set by his parents by responding to needs as they present themselves. One day, he was looking out the window of his condo and saw smoke coming from another residential area. Upon learning that the fire was in the home of a student, Hal along with members of the Purple Team at CHMS, together organized an effort with fellow staff to obtain replacement furniture and raise funds for other necessary items. Mr. Kilby honors his father, a World War II veteran, by raising money for the CHMS Veterans’ Club to purchase flags for veterans’ cemetery plots prior to Memorial Day observances. Mr. Kilby wishes to continue supporting his community by leaving a legacy.

The Hal Kilby Athletic Endowment Fund will benefit the community of Bristol through grants to the Park and Recreation Department, the Boys and Girls Club, American Legion Baseball and the schools’ athletic programs. Examples of potential uses of the funds include, but are not limited to: replacing worn out uniforms, purchasing equipment, making repairs and improvements to athletic facilities, etc. Hal Kilby may view his dedicated community service and planned gift as “modest”, but the positive impact of his active involvement in the Bristol community is very significant. The Hal Kilby Athletic Endowment Fund will serve generations of Bristol residents in the years yet to come.