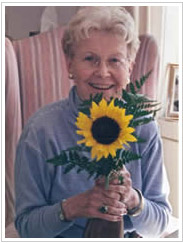 “I still see paintings everywhere and I think that is what I should do with whatever time I have left on this planet, just create small areas of beauty and color,” wrote Glo Sessions in a 2007 Christmas card to friends. A well known local artist and former resident of Bristol, she died November 20th, 2011 at the age of 89.

Glo Sessions left a bequest in the amount of $10,000 to create the Glo Sessions Fund for Art Education at the Main Street Community Foundation. Memorial donations have significantly contributed to the growth of the fund, which provides scholarships to Bristol residents for post-secondary education necessary to pursue a career in art. The first scholarship was awarded in 2014. “A strong candidate for a Glo Sessions Fund for Art Education scholarship would be someone who has passion for art. An applicant does not have to be a great artist, or someone right out of high school. This fund could also benefit someone who commits to developing artistic talent later in life,” explained Molly Bartram, Glo Sessions’ youngest child, “The process of creating art was what my mother valued most. She always had a work in progress, and if she wasn’t pleased with it, she would take a step back, paint over what she’d done, and try again.”

Glo Sessions was named Gloria May at birth, and raised in Massachusetts. As a child, she was always drawing. She made a booklet of drawings of flowers and gave it to her father. “She told me once that one of the best and most encouraging things that happened for her as a little girl was receiving a set of pastels,” recalled daughter Ruth Sessions.

Growing up, Glo painted murals in her Junior High School and in her family’s summer farm in Maine. “She painted a mural over the fireplace in the living room as well as a compass on the ceiling of one bedroom. That farm burned down in 1946, and her parents found another one for the family summers. In that dining room she painted an enormous mural of the countryside – even I remember that one,” recalled daughter Tulis McCall.

Glo received her early art education from Skidmore College. Honoring her father’s expectation that she would earn a living with her art degree, Glo landed a job in the Art Department of Macy’s in New York City after graduating. She later returned to the college for some post graduate work.

In 1945, she married Jim Sessions, a young man from Bristol whose family owned J.H. Sessions, a trunk hardware manufacturer. They spent some time in California where James served in the Army. After Jim left the service in 1946, the family returned to Connecticut and moved to the Forestville section of Bristol. In 1954 the family moved to Burlington Avenue in Bristol.

“While we were growing up, there was little time for my mother to pursue her artwork,” said Tulis. As much as possible, Glo incorporated art into daily her life and routines. A garden could be a palette, and she planted elaborate flower gardens most of her life, paying close attention to color and texture. She also produced an annual Christmas card each year that featured her artwork, and this tradition continued until her death in 2011.

In the late 1950’s, after Molly was born, Glo’s sister, Marylou, was instrumental in motivating her to paint again. Marylou’s husband, Carl, built an easel, and they brought it to Glo - along with paint supplies and encouragement to resume her work as an artist. With most of the children in school during the day, Glo dedicated some of her time to painting again.

Soon after this, Glo contacted Bill Thompson, an artist who lived in Bristol to ask him how to set up a studio. Glo learned to stretch her own canvas and soak watercolor paper before applying paint. She also began to take classes from Wick Knaus, a well-known artist from Canton and “her most influential teacher by far,” according to Ruth. Many years later, Glo became a teacher and shared her own knowledge with other aspiring artists.

Over the years, Glo’s skills expanded and became much more diversified. “I think one of the remarkable aspects of her work was that she tried everything: drawing, watercolors, oils, acrylic, sculpture, printmaking… She studied and was always reading articles on new methods or new approaches toward a particular subject. She taught herself how to create prints that were multicolored. This is a time consuming process because the paper needs to be pulled through the press several times in order to allow the colors to build up. Not a project for the faint of heart,” reflected Tulis. “She really fell in love with printmaking, bringing her consummate skills in drawing to the etching plate where she drew with needle sharp instruments directly onto a zinc plate through a coating of wax, freehand!” said Ruth, “She was such a competent and confident draftswoman.”

In 1960, Sessions, Knaus and Thompson were among the founding members of the Canton Gallery on the Green, a collective that exhibits works of area artists. In the early 1990’s, Glo was asked to be part of a group that was revitalizing the Carousel Museum in Bristol, and she later served years on the organization’s Board of Directors. A few years later, the museum expanded to include fine arts with an exhibition of Glo’s work, and the museum now owns 50 pieces that are on exhibit in the Glo Sessions Gallery.

Glo’s work is on display in universities, museums, and corporate offices throughout New England, and in private homes throughout the country. She received more than 40 awards over the course of her career. Sessions considered herself to be a painter and printmaker of people places and things people cherish.

“Just keep loving and spread it around so it gets to soak in like butter on warm toast,” Glo Sessions advised wisely. She lived by those words. “We always had people in our home. Mom frequently hosted social events for her adult friends, as well as our childhood friends,” recalled Molly. “When I was really young, I thought some of our guests were members of our family because they were in our home so often. Someone eventually had to explain to me that they were just friends, not my brothers.”

Glo’s love of her Bristol community was evident. Her legacy and generosity will continue through the Glo Sessions Fund for Art Education.