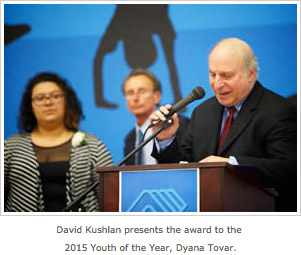 Bequest will Add to the Kushlan Family Legacy

June 2015 - ​​​​​​​“People would knock on my Uncle Charles’ door on a Sunday. He would walk with them down to the store, and open it up so they could get the supplies they needed. People in the whole town knew him. He was truly a man of the people, and of the community,” recalls David Kushlan, Charles’ nephew.

In 1977, the Charles Kushlan Memorial Fund was established by David Kushlan, on behalf of the Kushlan Family, and transferred to the Main Street Community Foundation in 2006. The Fund provides for The Charles Kushlan Memorial “Youth of the Year Award” at the Boys & Girls Club of Bristol Family Center. In order to be sure this award is given in perpetuity, it was only natural for David to leave a bequest in his estate plan to add additional funds to this permanent source of community capital.

David has not missed an opportunity to give the award at the Club’s Annual Recognition Dinner since the fund was established. “It is probably one of the oldest, consecutively given awards in the City of Bristol,” David stated. The award is given to help the recipient accomplish his or her educational and career goals.

In 1919, Charles Kushlan, at the remarkably young age of 19, founded the small, local Bristol Underprice Store on Old North Main Street in Bristol. With a lot of hard work and dedicated staff, he expanded operations to a larger building at the corner of North Main Street, next to the former Bristol Boys & Girls Club building.

During the span of Charles Kushlan’s career, he was often praised for both his good business sense and civic leadership. Charles believed the store should provide “a high degree of service to everyone.” He upheld that principle by hiring knowledgeable tradesmen to help customers, and maintained a gold standard of customer service and efficiency.

Charles’ success as a businessman enabled him to provide support to other family members in their pursuit of educational goals. Charles’ brother and David’s father, Samuel Kushlan, went on to become a distinguished Professor of Internal Medicine at the Yale Medical School in New Haven.

After Charles died in 1965, David continued to grow the business until his retirement in 1986. During this time, he became an active member of the OM (Older Members) Association of the Bristol Boys & Girls Club. The OMs are a truly dedicated group that provide direct services all year round to the Club and organize fundraisers such as the annual OM Show in support of the Club.

In 1977, David suggested that a monetary gift be given to the Club’s “Youth of the Year” recipient, in addition to the traditional plaque. That year, the Club’s Board of Directors approved an award in the amount of $300. Since then, the award has grown to $2,000 under David’s guidance. The tradition continues with the next generation, as David Kushlan Wanger, David’s nephew, attended the 2015 Youth of the Year Event.

David Kushlan is a true philanthropist. In addition to his support of the Bristol Boys & Girls Club “Youth of the Year” Award for the past 38 years, he most recently began organizing and providing funding for a program at the Club to help youth develop science, technology, engineering, and math skills. This is the “STEM” foundation required for success in many 21st century careers. David’s generosity will serve generations of youth in the years to come. Following his Uncle Charles’ example, David is a true “man of the community”.