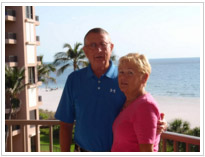 Time to Give Back - The Clement Family Fund

To understand why the Clement Family Fund was established, you first have to know a little about Tony and Sondra Clement. They have spent over seventy years in Bristol and they are both lifelong members and supporters of Asbury Methodist Church in Forestville. Their ties to the community are very strong.

They first met at Greene Hills Elementary School in the ‘50’s and even had a date or two, such as dates are for kids in the seventh and eighth grades. Tony, somewhat kiddingly, says Sondra pursued him. She says, "Pardon me, itwas quite the opposite.” Somewhere in those early years, a spark developed. They continued to date while at Bristol High School and within a few years after graduation, they were married. They both worked very hard so Tony could continue his education and he graduated from Tufts University in 1962. They have three children and five grandchildren. Two of the three children still reside in Bristol and their grandchildren are attending Bristol schools. Life has been good; a beautiful home in Bristol, another in Marco Island, Florida and a summer retreat on Sebago Lake, Frye Island, Maine.

Even though the Clements worked hard for what they have, they consider themselves very fortunate. They also recognize that others, especially children and young adults, can face long odds in trying to make a success of their lives. Hence, the Clement Family Fund.

The decision to set up the fund did not happen overnight. However, when a decision was finally made last December, it was a family affair. Tony, Sondra and their three adult children, Jeff, Kristie and Kimberly, agreed they all saw there was a need to offer assistance to less fortunate people. For them, it was time to give back. So in one voice they said, "Let’s do something."

Tony and Sondra liked what they had heard about the Main Street Community Foundation. When they met with the foundation's personnel, they felt comfortable and were immediately convinced this is where they would establish a donor advised fund. This type of fund will allow them to make recommendations to the Foundation about what kinds of projects and which nonprofit organizations will receive grants, providing the Clements the opportunity to help those most in need in the community.

Helping young adults to succeed and find their way in the future is one interest of the Clement family. The Clement family has owned and operated a successful mechanical contracting business since the early 1970’s and have deep respect for Bristol's technical education system. As a matter of fact, the company has hired graduates to be apprentices and then full-time employees. Tony stated, “These days, there is a lot of pressure on young students to enter college and too little emphasis on the opportunities for a career in a skilled trade. If you learn a good trade and work at it, a young man or woman can start out and make a wonderful career for themselves.”This is exactly what he and Sondra had in mind when they established the Clement Family Fund -- to show young people there are different educational opportunities in the world that can lead to a prosperous future. They believe grants recommended from their fund to organizations that can make the difference between success and failure for children and young adults will be one of the most gratifying things they've ever done.