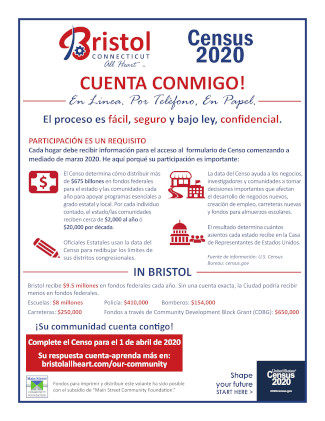 June 2021 - Published in: 2020 Annual Report - 2020 was a monumental year for so many reasons, one of which was the collection of data for the Census. Completed every 10 years, the Census not only provides a snapshot of our communities but it determines how many representatives each state will have in Congress and how much federal funding communities will receive for roads, schools, housing and social programs.

It is critical that everyone be counted. The City of Bristol established the Complete Count Committee to advance resident engagement activities and promote a positive and complete count of its residents. Many times, the people who are in the most need and would benefit the greatest from the data collected in the Census, are the same people who may be missed and not respond. One reason for that is due to language barriers. Bristol in particular has a high population of residents who are primarily Spanish-speaking.

MSCF awarded a $1,280 grant from the Money in Motion Fund to the City of Bristol whose Diversity Council created a bilingual flyer. The double-sided flyer had information on the three ways to fill out the Census, why participation is important and what the financial impact of federal funding is for Bristol.

To reach nearly everyone in the City, 18,000 flyers were inserted into the Bristol Observer, a free newspaper that was delivered to all Bristol homes. Another 2,000 flyers were distributed throughout the community at various events.

In addition to this initiative, MSCF as well as the City of Bristol participated in several other outreach efforts to ensure that all residents filled out the Census and were counted.